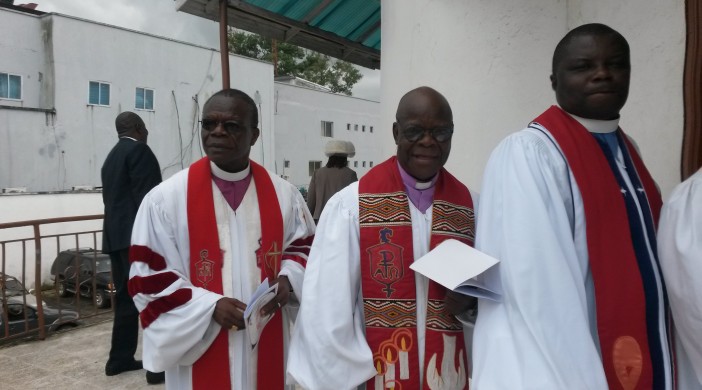 Retired Bishop Arthur Kulah has been called out of retirement for the second time to serve the Liberia Episcopal Area of the United Methodist Church as its Interim Bishop having served in similar capacity in the Nigeria Episcopal Area several years ago. Retired Bishop Kulah who served the Liberia Annual Conference for twenty before his retirement in 2000 will now serve the conference for the remaining four months of 2016.

At the ceremony marking the turning over of the mantle of power, Retired Bishop John Innis said he was leaving the church in the hands of someone who was well seasoned in the workings  of the United Methodist Church. “Bishop Kulah is no stranger to the Liberian society and the church, he will lead us peacefully through the transition,” Innis said. He praised Bishop Kulah for the cordial relationship that existed between the two of them during his sixteen years of service to the church. “He handed this mantle of power to me, I am now handing it over to him to ensure that we conclud the sixteen years peacefully,” he affirmed.

As part of his acceptance statement Bishop Kulah urged members of UMC Liberia to stop discussing the church using the social media. “If you have any issues with the conference and its leadership come and let us discuss them,” Bishop Kulah warned. He further urged members of the church to affirm each other in public while resolving their differences in private. “We need to protect the image of UMC Liberia so that the incoming bishop will inherit a peaceful church,” he asserted. He said a successful transition in December 2016 by the church will serve as and example for the 2017 national elections in Liberia. “The entire country is watching the United Methodist Church in Liberia”, Kulah concluded.

The revered clergyman who is over 80 years old is expected to lead the United Methodist Church in Liberia through its transition process which has been marked by internal conflict because of the conference “divorce legislation”. Bishop Kulah is credited for helping the Nigeria Episcopal Area in resolving their conflict which led to the election of Bishop John Yohanna in 2012.

Earlier Rev. George Wilson called on United Methodists throughout Liberia to lift each other up as  the Liberia Annual Conference prepares itself for the transition to a new leadership. Using the “Good Samaritan” story, Rev. Wilson challenged members of UMC Liberia to care for the church and support the leadership of the church in these critical months. “Do not not pass on the other side, but lift up your falling brothers and sisters regardless of the differences,” Wilson said.