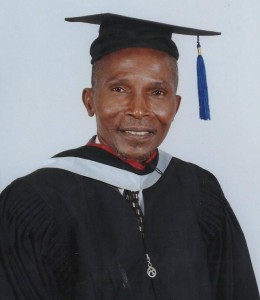 Julu Swen of the West African Writers, an online publication about United Methodist happenings in West Africa and assists the denomination in Liberia with coverage for United Methodist Communications on September 26, 2015 earned a master’s of theology degree from the Cuttington University in Liberia. Swen who is the editor and publisher of the West African Writers and a United Methodist who assists the Liberia Annual Conference was also awarded “United Methodist Communicator of the Year” in 2014 for his role in keeping the world informed about the Ebola virus. Swen who studied systematic theology said he is interested in working in the academic community using his communications skills to share Church of Jesus Christ with the world. “Though I am not a pastor, with a degree in theology I will contribute radically to the sharing the good news of the gospel Jesus Christ,” Swen said.

Swen holds an undergraduate degree in Mass Communication and a master degree in educational administration and supervision from the University of Liberia. He is the leader of the Publishing Team of the Liberia Annual Conference and member of the Doe Juah United Methodist Church in Gardnersville, a suburb of Monrovia.