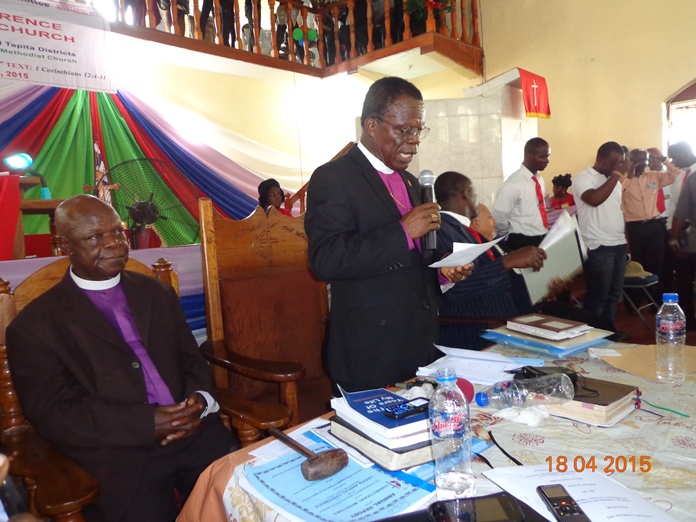 The Liberia Annual Conference of the United Methodist Church on Saturday, April 18, 2015 affirmed the Rule which bars divorced persons or divorcees from being nominated for the position of Bishop at the just ended conference held at the James E. Marshall UMC in Gardnersville, Liberia. Members attending the 182nd Session of the Liberia Annual Conference voted 433 to 24 to affirm the “long standing” decision that bars divorced clergy persons from being nominated for the position of bishop in the conference. Six members abstained from the voting process.

In the discussion preceding the voting process, some members at the conference argued that the provision violated the rights of individuals who had the desire to run for the episcopal office. “We want you to uphold the only requirement that the Book of Discipline set forth for the nomination and election process which states that the clergy should be an Elder in Full Connection and in Good Standing,” Petitioner Cletus Sieh said. He further argues that the United Methodist Church was connectional in nature and for UMC Liberia to adopt rules or policies that run contrary to the Book of Discipline will not be in the best interest of the connection.

Rev. Paye Cooper Mondolo, District Superintendent of the Weala District said that affirming the long standing decision was in the best interest of UMC Liberia. “The decision to bar divorced clergy persons from being nominated for the position of bishop will bring moral credibility to the episcopal office of our church and guide the conduct of those who want to be bishop in the future,” Rev. Mondolo argued. He indicated that the Rule has been used in the election of previous bishops and must prevail for the good of the church.

Earlier during the week of the conference and in their separate sessions (Clergy and Laity) discussed the “long standing rule” with the intention over turning it in the Laity session while the Clergy affirmed it. On April 14, 2015, the Clergy voted 90-1 to uphold the “long standing” decision of the Liberia Annual Conference barring divorcees from nomination to the position of Bishop in the conference. In its six page report, the Board of Ordained Ministry (BOM) outlined five counts dubbed “Reminders of the Conference Major Decisions (1985)” among which count five clearly states that “No divorced clergy is allowed to be nominated as a candidate for the office of Bishop our conference.”

For their part, the Laity in their annual session voted 116-0 for a petition calling for the Liberia Annual Conference to annul the decision barring divorced clergy persons from being nominated. The lay members called on the conference to uphold paragraphs 4, 403, and 604 of the 2012 Book of Discipline of the United Methodist Church. “We encourage officials of the conference, all pastors, lay members and delegates of conferences to allow the 2012 Book of Discipline to prevail, especially, paragraphs 4, 403, and 604 in all its intents.”

Earlier on Thursday, April 16, 2015 Petitioners disrupted the afternoon session of the Annual Conference through picketing forcing Bishop Innis to end the day’s session. On Friday, April 17, 2015 at the Petitioners’ request a court issued an injunction order on the several members of UMC Liberia including Bishop John Innis which was subsequently vacated by the court allowing the UMC Liberia to go ahead with the 182nd Session of the LAC/UMC. The adoption of the General Resolution which bars divorced clergy persons from being nominated by the Liberia Annual Conference for the position of Bishop now brings to rest the debate which has taken up so much of our time and energy as a Conference.