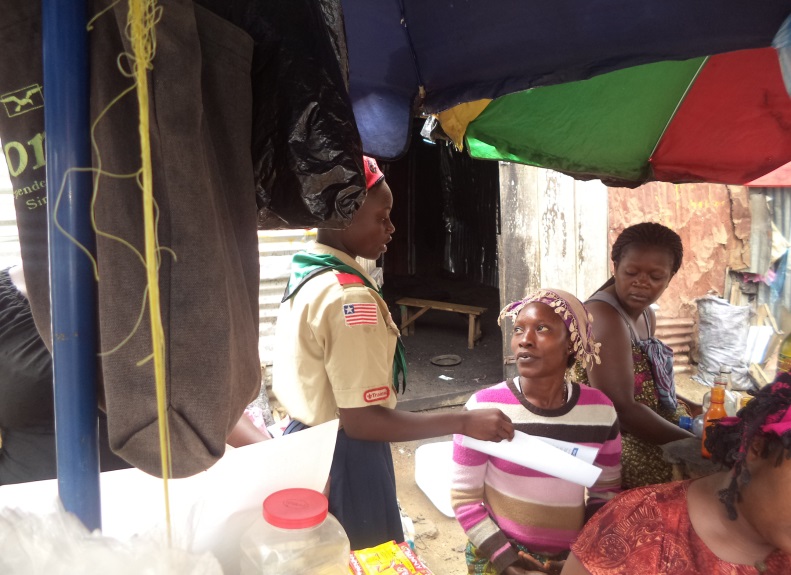 Scouting is a voluntary, educational, and non-political movement for young people, open to

all without distinction of origin, race or creed. The purpose of scouting is to contribute to the development of young people in achieving their full physical, intellectual, social, spiritual, emotional and character potentials as individuals, as responsible citizens, and as members of their local, national, and international communities.

The motto of scouting is ‘Be Prepared’; and its slogan is: ‘Do a good turn daily’. In fulfillment of the scout slogan, a local community troop of the Liberian Scout Association located in the community of Bernard Farm, the outskirts of the Monrovia, has embarked on a month-long Anti-Ebola sensitization and awareness campaign. The campaign started since August 18, 2014.

Over 30 scouts are involved in the exercise. The main objective is to reach over 5,000 locals within the Bernard Farm-FDA community and its environs with the ‘STOP EBOLA’ message. Several methods are employed by the scouts during the sensitization including messages to wash hands, avoid shaking hands, touching dead bodies and sick people, eating bush meat, coming into contact of bodily fluids of sick persons, among others. In addition, the scouts have creatively developed public dramatization of their messages. The exercise has galvanized community members into taking preventive measures and alerting each other for signs and symptoms of the virus. The locals have applauded the initiative of the scouts.

The campaign is initiated and supported by the People Empowerment Program (PEP) through its local leadership and its Dutch Foundation in The Netherlands. PEP is a local Liberian Non-governmental and not-for-profit organization whose mission is to empower people through transformative education as a means to combat ignorance, resource inequality, poor governance, human rights violations and gender disparity.