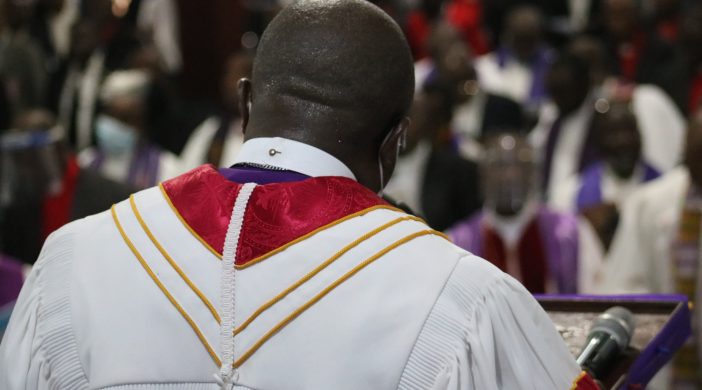 Quire warned that the church in Liberia would rather stand on the side of Scripture and truth, than to compromise its faith in the Scripture and disobey Jesus Christ, its Savior and Lord. “We are also confident that the God whom we serve is not broke, God will sustain God’s Church,” he emphasized.  Bishop Quire pointed out that the responsibility of United Methodists in Liberia is to be obedient disciples. “This is where I stand and this is where I invite all United Methodists in Liberia to stand along with me as we move into the future to serve Jesus Christ”, Bishop Quire concluded.

On Sunday, March 21, 2021 and at the closing session of the conference, The United Methodist Church in Liberia affirms its February 2020 decision to support the Traditionalist stance of the global United Methodist Church. In a seven count General Resolution, the conference said it will align itself with the wing of the church standing for the upholding of Scriptures in general, and in particular maintaining the 2016 Book of Discipline of the United Methodist Church and the definition of marriage, and its stance on homosexuality, and all of the Disciplinary restrictions currently appertaining thereto. “The Conference unanimously agreed that whatever direction the church takes in line with the future of the church, the Liberia Annual Conference will support this stance”, the resolution asserted.

Though the Conference did not take a vote count on the resolution, it was unanimously endorsed following two rap sessions led by Rev. Dr. Julius S. Nelson, Jr. for the Laity and Rev. Jerry P. Kulah for the Clergy. The two veteran General Conference delegates made their presentations to the separate sessions; Laity and Clergy, emphasizing the need for the conference to support the new denomination that will uphold scriptures and shun those that will not. Nelson cited the Christmas Covenant as one of the documents that seeks to uphold the liberal views of some United Methodists and silent on the issue of human sexuality.

In response, Jefferson Knight, member of the Liberia delegation to the 2022 General Conference and signatory to the Christmas Covenant told the gathered lay members of the conference that the only thing that the covenant was seeking to do was to maintain the unity of the church. “We don’t want to see the United Methodist Church divided, especially in Africa”, Knight emphasized. He pointed out that there is a need for the church in Liberia to work with other United Methodists in doing ministry for humanity whatever their orientation in life. Knight is also member of the Africa Voice of Unity and a signatory to their recent statement calling for the in Africa to remain united.

The 188th Annual Session of the Liberia Annual Conference is one of the many legislative gatherings of the United Methodist Church in Liberia where activities of the church is reviewed and decisions for future operations are made. The 2021 Annual Session was held in Gbarnga City, Bong County, central Liberia and it brought together over 1000 members of the conference.