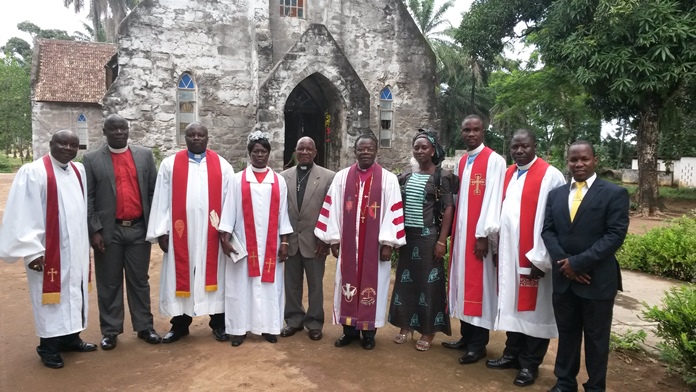 Rev. Aaron Yankee has been inducted into office as the 3rd District Superintendent of the Gompa District in Nimba County since the Episcopal leadership of the Rev. Dr. John G. Innis of the Liberia Area, the United Methodist Church. He now heads the district with one of the biggest UMC Liberia health facility in in the country. “Be a leader to your people and not a ruler who will push them around,” Bishop Innis urged him.

the UMC Ganta Hospital staff. He said as a leader, Rev. Yankee should listen to his people in decisions making for the good of the Gompa District. He warned him not to spend time in wanting to be like other people, but rather be himself and depend on God for directions as he leads the district. “Do not compare Aaron to other leaders before him,” Bishop Innis said speaking to the congregation gathered for the worship service.

As part of his induction message, Bishop Innis called on all United Methodists throughout Liberia to love and respect their leaders and work with them for the good of the church and their service to the Liberian people. He said members should dialogue with their leaders for the uplifting of the church. He challenged them to seek the face of God as they work towards finding a new leadership for the United Methodist Church in Liberia. He further urged all those who want to lead the United Methodist Church in Liberia to wait for God’s time.

Earlier, Bishop Innis praised the staff of the entire Ganta Mission Station team especially the UMC Ganta Hospital staff for their good work in serving humanity in northern Liberia. “Your courage to fight against the deadly Ebola virus and provide services to our people at the time will remain with us for a long time,” he added. Though declared Ebola free, he urged the congregation to practice all of the preventive methods as if the virus was still in Liberia.

For his part, the reigning District Superintendent, Rev Aaron Yankee said he will serve the people of Gompa District and the United Methodist Church of Liberia based on Bible, the Book of Discipline, and other policies that will ensure the smooth operation of the district. “I will lead with love,” he concluded. Rev. Aaron Yankee succeeds Rev. Dr. James Labala after serving UMC Liberia as it supervisor for the Guinea Ministry in Diecke, Guinea. The induction ceremony on Sunday, June 21, 2015 in Ganta City, Nimba County makes Rev. Yankee the 3rd District Superintendent for Gompa District under Bishop Innis leadership.