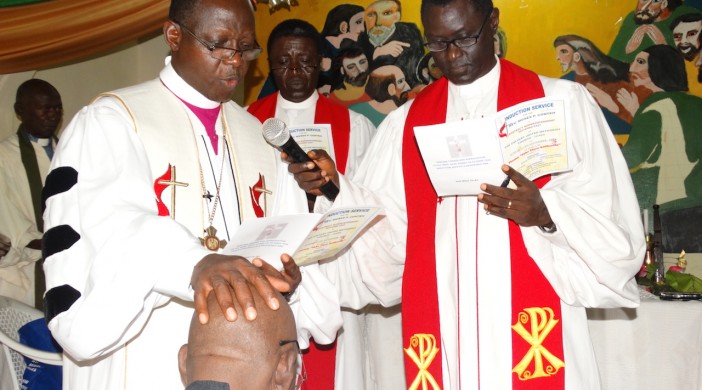 Former Director of Administration in the Office of the Bishop, the Rev Moses Conteh has been inducted as District Superintendent of the Moyamba East District in the Sierra Leone Conference.

Conteh was inducted Sunday September 11 at the Calvary United Methodist Church in Taiama, Moyamba District where he has been serving since his appointment as District Superintendent at the 136th session of the Sierra Leone Conference in March 2016.

“I thank God for this day that He has appointed me as District Superintendent. I thank you all for cooperating with me so far. And I want you to support me so that all of us will work together in furthering God’s work here in Moyamba East. God is for all – whether you live in Taiama or elsewhere in the world”, Rev Conteh said after the induction ceremony.

Preaching at the ceremony Bishop Yambasu urged the new District Superintendent to be courageous and strong in a message titled Take Thou Authority taken from Joshua 1:1-9. He said the leader must have authority to take actions; he must have courage to overcome fear and intimidation. The bishop said the pastor’s authority is in the Bible. He said some pastors fail because they do not preach the bible but themselves. He said pastors must preach the word and must not allow themselves to be intimidated by the powerful people in their congregation because the pastor is appointed by God to lead them. He likened the pastor to a traffic police officer who stops and instructs drivers no matter who they are in society. The driver is bound by law to obey. Hence, pastors are bound by the bible to regulate the life of members of their congregation but they can only do so if they work with self-control and integrity. The Bishop said when God told Joshua “Take thou authority”, He meant be in control. “If you don’t take authority Rev Conteh, the district will take authority over you”, the bishop told District Superintendent Conteh.

It is the tradition of the Sierra Leone Annual conference for clergy being ordained or inducted to have their spouses stand by them and to affirm their approval for the pastor/superintendent being ordained or inducted. If the spouse does not approve, the induction or ordination is canceled right away. By Rev Conteh, was his wife Salamatu Conteh who was asked whether it was with her consent the husband was taking his next step in ministry. She consented for Rev Conteh to be inducted as District Superintendent. There is no history yet of a spouse who has disapproved the ordination or induction of a pastor on the day of ordination or induction.

inducted into office on Sunday.

The Sierra Leone Conference has nine districts with a potential for more districts in new and growing mission areas in Kailahun, Port Loko, Kabala and Kambia.

Rev Moses Patrick Conteh is a graduate of Cuttington University Graduate School and Professional Studies, Monrovia, Liberia. He holds a Masters Degree in Systematic Theology after having previously graduated from the Sierra Leone Theological College and Church Training Center with a Bachelor Degree in Pastoral Studies in 2008. He holds a diploma in Theology and an International diploma in Applied Ministry and Missions (IDIAMM) from Cliff College UK. He also holds a certificate of Proficiency in Pastoral Studies by extension which led to his ordination as deacon and Elder in 1997 and 1999 respectively in the United Methodist Church, Sierra Leone Annual Conference.

Conteh started life as a postal worker. He worked in many parts of Sierra Leone as postmaster and later retired as Postal Controller in the Sierra Leone Postal Services (SALPOST) in 2001.

Conteh joined the full time itinerant ministry in 2001 and was appointed pastor of Charles Davies Memorial United Methodist Church in western Freetown where the construction of the main sanctuary started under his leadership. In 2007, he was appointed pastor in charge of Bishop Baughman Memorial UMC at Brookfields Freetown. He was appointed Director of Administration in the office of the bishop in 2009 where he worked before leaving for Monrovia, Liberia to pursue his Masters degree. Upon his return home, he was appointed District Superintendent of the Moyamba East District.

Rev Conteh is married to Salamatu Conteh with four children.

Story and photos by: Phileas Jusu