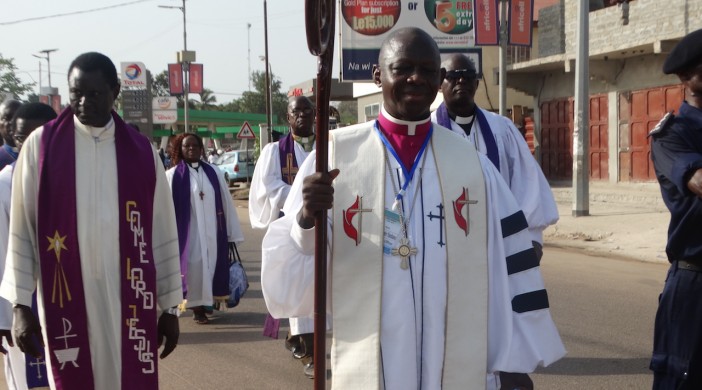 The 137th session of the Sierra Leone Annual Conference is underway in Makeni, northern Sierra Leone.

The March 8-12 meeting will among other decisions vote on five amendments proposed at the 2016 General Conference that address matters of gender equality, inclusiveness in membership, delegate and bishop elections, as well as bishop accountability.

This year’s theme, The Journey Ahead is from Joshua 3: 1-17. In his episcopal speech Thursday, Bishop Yambasu recounted “While we celebrated the many missional breakthroughs … in the past eight years, we must be reminded that we still have a long and challenging journey ahead.” Hence, the theme The Journey Ahead is a reminder to conference to recall the Bishop’s Vision 2020 which he committed himself to in his first episcopal speech in 2009. He gave a rundown of the achievements made and what is yet to happen.

Key among the development pledges Bishop Yambasu made at the time was the establishment of The United Methodist University. On Thursday, he informed the Annual Conference that the University still remained his priority. The first facility to open will be the School of Theology. The university has been registered as a corporate business and now awaits accreditation from the Tertiary Education Commission of Sierra Leone. The Theology Facility is scheduled to open in April.

Construction of The School of Health and Clinical Sciences – located in Bo, southern Sierra Leone is underway and will be opened in 2018.

The School of Agriculture and Education will open in subsequent years.

As part of his Vision 2020 updates, the bishop also reported on the improvements made in health over the past nine years of his episcopal leadership despite the financial challenges the conference faced. At Mercy Hospital in Bo, a new surgical unit is being constructed. When completed, it will increase the 32-bed capacity facility to 50.

At the Hartfields – Archer Hospital, in Rotifunk, a new 30 KVA generator will combine with a new solar plan that will ensure 24-hour electricity, which is hoped to improve on the hospital’s efficiency in service delivery.

The bishop was proud to say that The United Methodist Church has done very well in just three years of Community Development projects. He said the denomination’s community-based approach continues to improve the lives of rural and vulnerable communities across the country.

Most of the community development projects have been undertaken by the conference’s Community Empowerment for Livelihood and Development (CELAD)- born out of the partnership with the United Methodist Church in Norway. More community development projects will be done in the coming years following the signing of a February 28 MOU with Mission Alliance – a Norwegian international Christian NGO. Mission Alliance focuses more on Water, Sanitation and Health (WASH). Mission Alliance’s Sierra Leone Project will be known as TRACE – Transformation, Restoration And Community Empowerment.  “It is my hope that through this project, underserved and vulnerable rural communities in the various operational areas in Sierra Leone will be given the opportunity to improve themselves”, Yambasu said on Thursday.

“The days of handouts are over. With Africa now accounting for about 40% of the entire membership of the global United Methodist Church, General Conference is now saying that we must “put our money where our mouth is,” the bishop warned the Conference Thursday.

He said for the first time, General Conference has asked all conferences in Africa to contribute to the global apportionment system. He reported that the level of apportionment is determined by the total membership of each Episcopal Area. Accordingly, Sierra Leone has been apportioned $28,000 for 2017.

On another note, he informed the Conference that salaries for November and December of pastors who did not pay their apportionments in full for 2016 were withheld for two reasons: that because pastors are assured of their salaries every month, they do not place premium on the payment of apportionments. Also, some district superintendents collect apportionments from pastors but fail to turn them over to the Conference.

Hence, the policy shall remain that only pastors who pay their apportionments in full shall receive salaries at the end of the month. Further, only congregations who pay their apportionments in full will have their pastors and members considered for election as delegates to Central, General and other international conferences and any other opportunities and privileges that may be available from time to time. Bishop’s cabinet has also agreed that district superintendents who fail to pay full apportionments for the year will be moved and replaced.

Photos and Reporting by Phileas Jusu.
United Methodist Communicator of the Year, 2014.