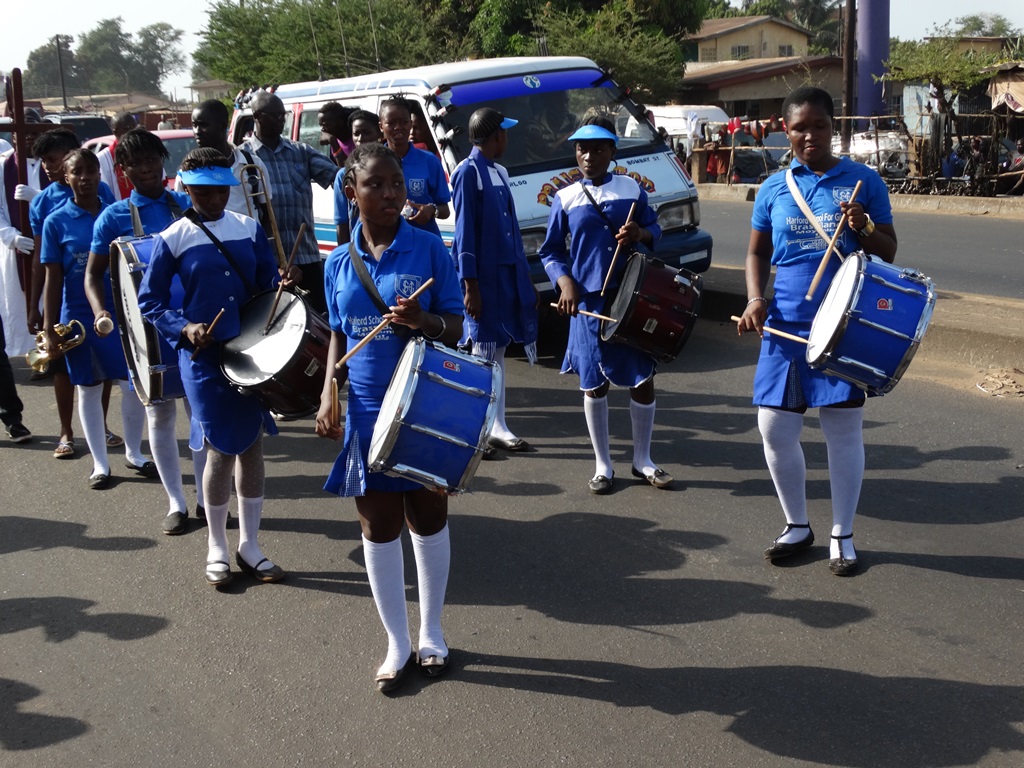 The Sierra Leone Annual Conference commenced its first Annual Conference after Ebola in a carnival-like style with brass bands playing at a march past that brought together about two thousand United Methodists within Sierra Leone and invited guests from neighboring Liberia, Cote d’Ivoire, Nigeria, Germany, the United States and Norway.

Crowd processions including march-pasts – a popular culture in celebrations in Sierra Leone – were banned during Ebola and restrictions still remain in place on many public gatherings. A police clearance has to be sought through a letter to the Inspector General of police for most public meetings and demonstrations. When it was eventually allowed to hold a restrictive two-day semblance of Annual Conference in 2015, there were harsh restrictions in place including a ban on street procession and number of delegates drastically reduced while state authorities monitored progress. The Sierra Leone Conference is among the few now enjoying the relaxation of Ebola restrictions.

The 136th session of the Sierra Leone Annual Conference with the theme “Claiming God’s Divine Promise” (Exodus 33:1) Thursday threw thousands of United Methodists onto the streets of eastern Freetown in a march past with at least five brass bands playing. Singing songs of praises amid drumbeats and trumpets, the young , elderly and children processed from the west end of the host church Brown Memorial UMC in eastern Freetown circling round slightly over two kilometers to the east end of the church.

“We are slowly returning to normal ways”, Isatu Conteh, a street trader who abandoned her wares to join the group of onlookers remarked as she watch the long throng of United Methodists march past her area.

Mohr said that when the church comes together, they experience fellowship across boarders. He said God promises His people a good future. He will lead his people to a land flowing with milk and honey. He said sometimes God speaks about the land flowing with milk and honey. Sometimes he uses other words. At other times he promises that his people will live under His shalom – that they live in peace; that they live together in righteousness and justice. He said though Shalom means peace, it also means that God will give his people other means to live which includes food, justice. He said it includes a health system that works. It includes good education. It includes that we live together in harmony. That unemployed people find good jobs. He said God created man in his own image and thus wanted his people to live in dignity as the image of God.

Mohr’s numerous examples of the goodness God intended for mankind clearly showed his disappointment at what he sees around as deprivation, unemployment, disease and lack – all elements of abject poverty. But he said though all of this was happening around, the people of God must be hopeful and believe that God through Christ will turn things around. He said they must trust and not be stiff-necked people.

The official opening of the Representative Session of conference took place Friday march 11 by Bishop Yambasu. A memorial service to celebrate those who lost their lives during the Ebola epidemic including 11 medical doctors and over 200 health workers will be held on Saturday. Sunday will be ordination and closing worship service. Guest Preacher will be Bishop Jane Allen Middleton of the New York Conference, USA.

BY PHILEAS JUSU AND JULU SWEN