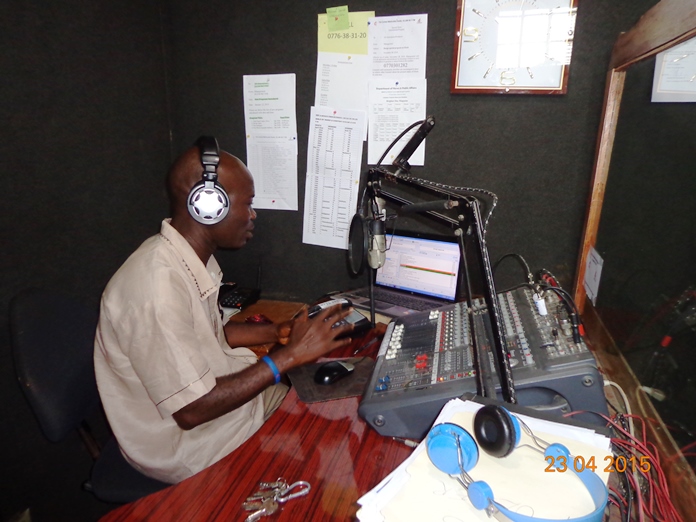 In fulfillment of its memorandum of understanding signed in December 2014 with the United Methodist Church in Liberia, the United Methodist Communications (UMCom) based in Nashville, Tennessee,  the United States of America have supplied the Liberia church with equipment worth over $10,000 United States Dollars. The new state of the art equipment includes laptops, wireless headphones for the radio station, mobile phones, stereo mixer, and other accessories.

Dedicating the equipment on Thursday, April 23, 2015, Bishop John G. Innis, Resident Bishop of the Liberia Area, United Methodist Church said the equipment will be used to enhance the communications ministry of UMC Liberia. “We will get the message out to our people through this equipment and by the grace of God and with the help of our UMCom partners we will cover the entire country by radio,” Bishop Innis said. He indicated that the global United Methodist Church through UMCom has been persistent in sharing comforting messages with our people through texting since the outbreak of the Ebola crisis in Liberia. The text messages are a sign of care as indicated by most of my cabinet (District Superintendents) members during my interaction with them since I came back to the country,” the UMC Liberia Bishop added.

Escorted by his cabinet to the dedication ceremony, Bishop Innis called on them to support the communications department, especially the radio ministry which is the easiest way to reach United Methodists and other Christians in Liberia. He thanked UMCom and reiterated his acknowledgment of their work in Liberia for the church. “Again, let me say here that the intervention of UMCom has enhanced our communications ministry tremendously,” Bishop Innis concluded

For his part, the director of communications of UMC Liberia Zehyu Wuduorgar said he was overwhelmed by the faithfulness of UMCom in standing with his department in their time of needs. “They kept their words and were very forceful in getting us to do some of the interventions that were carried out during the Ebola crisis,” Zehyu said. He thanked UMCom for giving his department a head start in most of the work they have to undertake during the conference year. “The radio department will go from strength to strength as long as our partnership with UMCom lasts,” he concluded.

Being partners over the years, UMCom intensified its involvement in the work and mission of UMC Liberia since the outbreak of the Ebola crisis. The agency initially donated $10,000 to UMC Liberia to kick start it Ebola prevention information dissemination in 2014, the provision of sola powered radios for pastors throughout the Liberia Annual Conference, and text messaging on Ebola prevention which is ongoing at the moment. At the moment, UMC Liberia has over 300 pieces of the solar powered radios in Liberia sent in by UMCom for distribution to pastors.