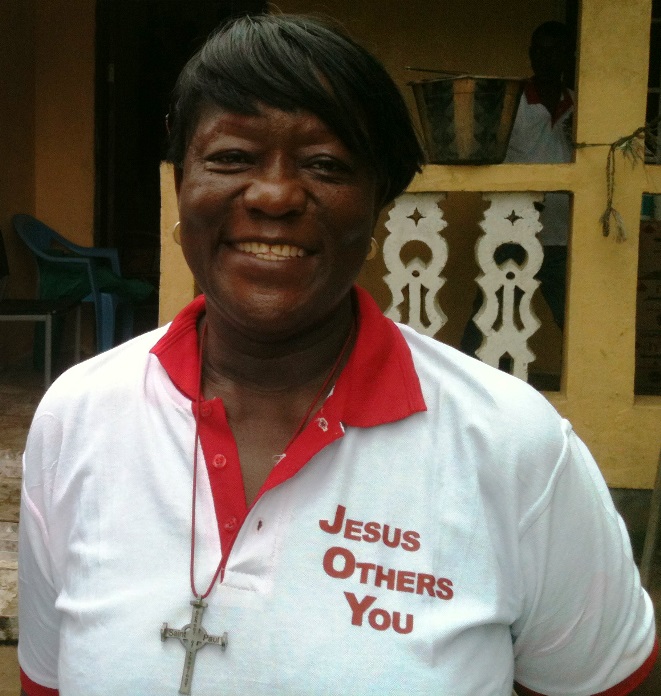 The Rev. Dr. Yatta R. Young, a United Methodist Church educator, former Dean of the Gbarnga School of Theology (GST) in Liberia, and head of the group Love Beyond Borders, on Saturday, September 6, 2014 joined the anti-Ebola campaign by distributing preventive materials such as buckets, chlorine, and soap to homes in the New Georgia Estate Community. Dr. Young said she was moved by the fact that there were families who were not able to get all of the preventive materials and were in imminent danger of contracting the Ebola virus. “If my neighbors are not safe, my household will not be safe no matter what we do,” Dr. Young emphasized. She said the only way the threat posed by the Ebola virus can be defeated is when each household is able to prevent the deadly Ebola virus at the level of the family.

Presenting the preventive items to one household, the UMC Liberia educator said the health of one family should be the concern of all Liberians. She told the family that she wanted them to get into the habit of washing their hands as often as possible to prevent the Ebola virus. The former Dean of the GST told the family that children were the most vulnerable group of people as the nation carry on its fight against the Ebola virus. Referring to the children, the UMC Liberia clergywoman said, “My heart goes out to these little ones, and I want you to make sure that they wash their hands always to keep safe.”

with the Ebola preventive materials to the Liberia Education Children Foundation Orphanage within the New Georgia Community. The food items which included rice, oil, and variety of canned meat and fish were presented to Bendu N. Nimley, caregiver of the orphanage. Mother Young, as she is commonly called, told the children that she was making the presentation to demonstrate her love and concern for children throughout Liberia. “I want you to wash your hands to keep safe from the Ebola virus,” Dr. Young said.

Accepting the items on behalf of the orphanage, the Caregiver, Bendu N. Nimley thanked Love Beyond Borders through its head, Dr. Young, and promised that the items will be used for the purpose of feeding the children at the orphanage. “You are the first person to bring us buckets and food since the crisis started,” Madam Nimley added.

Love Beyond Borders is a concept that is aimed at sharing the love of God with the rest of the world through children. The Liberia initiative to campaign against the Ebola virus was funded by Rev. Dr. Krista Kiger, Pastor of the First Presbyterian Church in St. Joseph, Missouri, and Pastors Louis Monroe and Connie Monroe of the New Hope Missionary Baptist Church also in St. Joseph, Missouri. According to Dr. Young, Love Beyond Borders is interested in the welfare of the disadvantaged or less fortunate Liberian children. “During the time of this crisis and beyond, we will ensure that the safety of children is given more attention by the church and the state,” Rev. Young concluded.