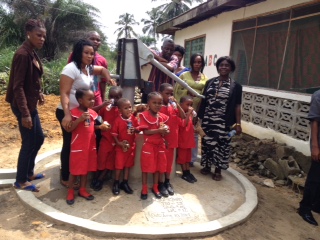 UMC Liberia Addresses the Plights of the Needy Liberians

June 28, 2015 – Monrovia, Liberia: The United Methodist Church of Liberia during the week responded to the hunger and health need of the people of Monrovia by providing monthly food assistance and constructing water wells (hand pumps). According to the Pastor of the S. T. Nagbe United Methodist Church, Rev. Matthew Jaiah said the food ration is intended to help the “physically challenged” and the senior citizens of the city of Monrovia who are in need. “We are helping them to deal with their poverty situation which is made worst by the Ebola crisis,” Rev. Jaiah added.

Senior Pastor Jaiah indicated that as a unit of the UMC Liberia, the local church was extending the feeding ministry of the church to the people especially the “physically challenged” and the senior citizens. He also indicated that the food distribution is not targeting only United Methodists, but all who come to the gates of the church on the day the food is distributed including homeless young men and women. “Over two to three hundred persons come to the church on any given day of our distribution to receive food,” Jaiah confirmed, adding, “this is part of our way of evangelizing in Monrovia.”

Dubbed the Feeding Program of S. T. Nagbe UMC and presided over by Evelyn Toe, the program also provide hot meals exclusively for the “physically challenged”.

Evelyn Toe, head of the program said the feeding program cost the local church over $1500 each month. “We are fulfilling the mission of the United Methodist Church of Liberia and its partners overseas through this exercise,” she said. On the question of who qualified for the feeding program, especially the hot meal beside the “physically challenged”, Evelyn said the homeless, drug addicts, and other individuals who cannot afford regular meal are the ones benefiting from the church, adding, “we are open to all persons regardless of their faith.”

In a related development, the Human Rights Monitor of UMC Liberia during the week constructed and dedicated eight water wells (locally referred to as hand pumps) throughout the suburb of Monrovia in eight communities including Thinker Village, Caldwell, and the ELBC Community. The water wells were constructed by the UMC

Liberia Human Rights Monitor because of the water contamination suffered by these communities due to the Ebola crisis and the threat posed by water-boned diseases in these communities. “The health of our people is crucial to the United Methodist Church of Liberia,” Jefferson Knight head of the UMC Liberia Human Rights said. Knight also said, protecting the people from water-boned diseases is a step towards in kicking poverty out of their lives.

Started since 2008 as part of the Peace with Justice program of the UMC Liberia, the “Water for Life Project” has been constructing water wells in different parts of Liberia for the purpose of providing safe drinking water for the people of Liberia. According to Knight the recent construction of water wells was funded from the Advance Asking of the general United Methodist Church with the amount of 19,000 United States Dollars. “This is the beginning of the number of water wells that we will be constructing throughout Liberia,” he asserted

The food distribution and the water wells activities were conducted in Monrovia on Friday, June 26, 2015 by the various units of the United Methodist Church of Liberia as part of the extension of the ministries of the church to the people of Liberia with support from their global partners especially those in the United States of America. Stephen Trowen Nagbe UMC headed the feeding program while the Human Right Monitor headed the water wells initiative.