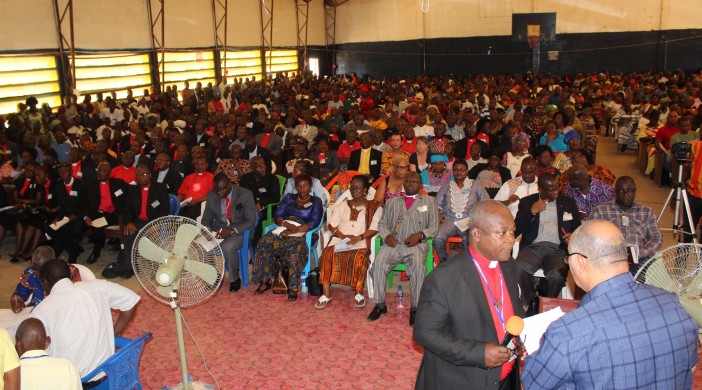 The United Methodist Church in Liberia meeting in its 184th Annual Session voted no to amendments numbers one and two and voted yes to amendments numbers three, four, and five on Saturday, February 18, 2017. In an hour-long discussion led by the now former Conference Lay Leader, Rudolph Merab and two consultants, Rev. Dr. Jerry Kulah and Rev. Dr. Julius Nelson, members of the conference voted amendments one and two down because the African delegates to the 2016 General Conference had earlier voted them down.

Leading the voting process, the Rev. Dr. Jerry Kulah said the characterization of God without a gender is the basis for voting down amendment one. He said as a conference we believe men and women are of equal value in the eyes of God, adding, “We think by changing the character of God into a genderless character which this amendment is seeking to do is not scriptural. Though the General Conference approved the measure by a vote of 746 to 56, the Liberian church voted it down with 956 “No” votes representing the entire membership of the conference in attendance.

Amendment two was voted down with 954 “No” votes with two conference members abstaining from the process.

Asked if she endorses the conference decision to vote down the amendment which declares that “men and women are of equal value in the eyes of God,” Yatta Young, Dean of the Master of Divinity program at the United Methodist University said the decision is intended to strengthen the masculine concept of the African men. “I can only address God as Him because of convenience,” Young said. The United Methodist educator said the characteristic of God is neither male nor female and as such the church should find a way that will not be offensive to some women because God is addressed as father.

The 184th Annual Session also voted overwhelmingly to approve amendments 3, 4, and 5 as changes that need to be affected by the General Conference in the new UMC Book of Discipline.

Amendment three addresses the issue of the elections of delegates to General, jurisdictional and central conferences and was discussed at length and was later endorsed with a 952 “Yes” votes, two “No” votes, with two conference members abstaining from the process. Alfred Kwabena Mensah, a young adult who voted against the amendment said approving such amendment will the undermine the ability of [specific organizations] to be represented by their leadership. “What will the presidents do when they are not elected by their organizations to the various conferences,” Mensah asked?

The Ganta gathering of the United Methodist Church in Liberia adopted a budget of 1.7 million United States dollars for the 2017 Conference Year. The execution of the budget will now be managed by the Conference Council on Finance and Administration (CCF&A) along with the representative of the Area Finance Executive from the General Board of Global Ministries of the United Methodist Church.

As part of its general resolutions, the 184th Annual Session approved Bishop Samuel J. Quire, Jr recommendation naming an endowment fund in honor of President Ellen Johnson Sirleaf to support girl education. “The endowment fund will seek to remove girls from the streets and place them into good institutions of learning,” Bishop Quire concluded.
The 184th Annual Session of the United Methodist Church in Liberia was attended by 554 clergy members 402 lay members in Ganta City, Nimba County, northern Liberia.