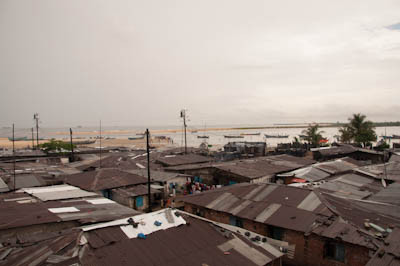 Residents of the quarantined slum community of West Point have turned down the offer of the Liberia Government to assist them with food and water amidst an imminent food shortage. Speaking to WAW on a telephone line, Rev. Agrippa Nyentee who is a United Methodist pastor now trapped in the community said the government brought in 300 bags of rice (25kg) and 60 large bags of water which each contain 30 small plastic bags of drinking water on Thursday morning (August 21, 2014). “The food aid will create more confusion between the government and the people of the community,” Rev. Nyentee said.

The UMC Liberia pastor said there are over 75,000 persons living in the community and supplying them with 1,800 bags of water is like a joke on the part of the Liberian government. He confirmed that authorities of the community were now holding meetings for their next course of action. “Some of the assistance we want from the government of Liberia is to open a corridor for business people to bring in needed food commodities.” “Let the government start their tracking and testing process which triggered the incident in the first place and work towards ending the lock-down,” the clergyman added.

Other sources in the community that spoke to WAW said the food truck was left with thugs in the community after the leadership decided that the food was not enough to serve the people. The thugs are now hauling the rice while some are tearing the bags and wasting the rice claiming that it is not worthy of human consumption. Another source said other West Pointers are taking the rice instead of letting go to waste. “Elders of the community are now locked in series of meetings to decide whether to accept the rice and water just as it is,” the source said.

Meanwhile, the Government of Liberia said twelve persons were released as of August 20, 2014 from the ELWA isolation unit after they were tested and found not to have the Ebola virus anymore. Speaking for the Health Ministry during the Government of Liberia regular press briefing, Deputy Health Minister, Torbor Nyenswah, about five of the released persons were Ebola confirmed and the rest were suspected cased. He also confirmed that the accumulated Ebola related death cases is 211, while cumulative total is 1,024 (suspected, probable, and confirmed) as of August 21, 2014.