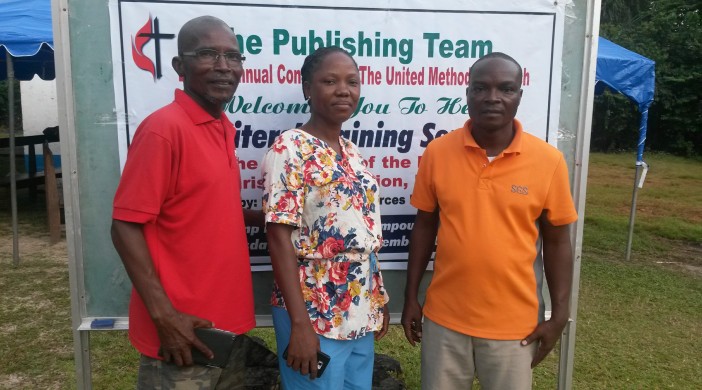 The Publishing Team of the Liberia Annual Conference, The United Methodist Church in November 10-12, 2016 hosted its  its 4th Writers’ Training Seminar at Camp Lawana on the ELWA Compound outside of Monrovia. The three day event brought together members of the publishing team, students from the United Methodist School System, and other Liberians.

Sponsored by the UMC Discipleship Ministries through the Discipleship Resources International (DRI), the publishing team of the Liberia Annual Conference has been training United Methodists as well as other Liberians, especially Christians to write the stories of their church and communities from the local perspective. Speaking at the program, the Publishing Team Leader, E Julu Swen said that he was overwhelmed by the progress made by the team since the partnership with DRI in training writers. “This partnership has enhanced the writing skills of some of us,” Swen said. He indicated that the publishing team in Liberia has written several books that are very useful in teaching about the mission and ministry of the church, adding, “we have reprinting Bible Text Books that are now being used by the United Methodist Schools.”

The UMC Liberia Publishing Team leader acknowledged that progress has been slow in meeting the publishing objectives of the team, the need to keep on training more people should not be abandoned by the church and its overseas partners. “Like the publishing team concept itself that started with few conferences, but, now grew to more than 14 publishing teams and still growing, we will become writers someday,” Swen affirmed. He called on all Liberians, especially United Methodists to get involved in the habit of writing and reading, adding, “buy those books that are worth reading to enhance your capacity in writing and reading.”

For his part, Rev. George D. Wilson, Jr., Director of the Connectional Table of UMC Liberia thanked the Discipleship Ministries and the Discipleship Resources International in particular for their support to the Liberia publishing team. He said the relationship between the publishing team and DRI has overreaching benefits that the church in Liberia is enjoying. “Thanks to the relationship we now have books, including the Ebola Facts Booklet in our schools and churches,” Wilson said.  The UMC Liberia church leader also said the publishing team needs to rise up to the level of acquiring publishing or printing contracts from the local churches and the conference. “The church needs to start its own publishing plant like the one we had before the war,” he concluded.

The 4th Writers’ Training Seminar feature among many topics; Designing a Publishing Plan, Publishing in the age of Technology, and Public Health in the Family and Community. Presenters included Bro. George Stewart, Mrs Marcia L. Stevens,  E Julu Swen, among others.